Homes Keep You Safer Than You Think – Against Covid19 and More 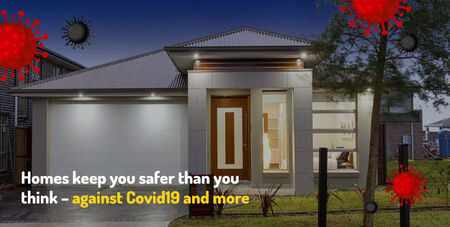 The main reason we keep a roof over our heads is to keep the elements out.

Incidentally and to our advantage, in pandemics such as Covid-19, it also helps keep sickness out as long as we stay in. What’s more, the better-built it is, the more security it can offer.

Staying at home during a viral outbreak and practicing good hygiene has proven to be an effective measure to slow or prevent the spread of the disease. Other innovations developed through time such as sturdier material, more flexible components, and many more helped to keep out not just potential disease-carrying elements but also ready dangers such as people with harmful intent.

It’s not a farfetched thought that having a finely-constructed home can be your primary guard too. But what could be the characteristics of great home security that can help protect you and your family from potential dangers?

Keeping you safe from weather and environmental threats

The first way your house can protect you from invisible perils such as airborne viruses or weather-related illnesses is through its structural form. A well-built house is made of strong materials that can withstand substantial weather for decades, and prevent the ingress of elements such as water, snow, dust, pollen, and more.

It also helps if the structure’s exterior is a composite of materials that can respond to constant weathering such as heat, cold, and wind. This is important especially in countries such as Australia, where temperatures can range from very chilly in winter and blazing hot in summer months.

Weak or substandard materials can lead to cracks and the structural integrity of your home being compromised. This can lead to entry of gusts of wind, cold blasts, and more, weakening the structure further and endangering the occupants.

Use of wall wrapping around the house reduces draught through the wall frame, provides all-around insulation and reduces air infiltration. This makes home insulation work more efficiently, which means staying warmer in winter and cooler in summer. It also helps in reducing moisture, increasing energy efficiency and protecting the building structure from weather.

Materials such as weephole fillers help to keep all external bugs away as well as at the same time keep air ventilation in wall cavities. It helps preventing the entry of pests such as termites, as well as sparks and embers in bush fire zones.

Again, this is helpful in the changing seasons to prevent water from freezing and damaging pipes, or gas leaks which may result in fires or explosions. Keeping the home weather-resistant also lessens the chances for your family to get sick, since you have better control of temperature, humidity, and like mentioned above keep out potential allergens or minute hazards.

You and your family would be safer with modern innovations installed in your home. Passive Infrared Sensors (PIR sensors) can detect motion and set off alarms from unwanted entry, and this is helpful in warning you of anything from stray animals to potential criminals barging in on your property. Animals are less of a worry in highly urbanised areas such as Sydney, but opting for better safety against persons sneaking in is always a great preemptive solution.

PIR sensors are very small devices housed in a hermetically-sealed metal can that can withstand humidity, changes in temperature, and noise. It has a window that allows infrared rays to pass through, and inside are two balanced IR sensors.

A specially-designed lens maximises the sensing areas to be scattered into small segments rather than wide gaps, increasing the effectiveness of the sensor. When an intruder passes through the sensing areas, the sensor picks up the “disturbance’ in the gaps and sets off the alarm or other security measures.

PIR sensors are a fantastic combination with closed-circuit television cameras (CCTVs) and other automated features, which can for example allow a signal to reach out to the closest police station or display the alert on the owner’s mobile phone or computer.

Other sensors also play an important part in keeping the house and its inhabitants safe, such as smoke/fire detectors and sprinklers. These handy devices have become an inclusion in modern homes as they increase safety by a large margin against fires.

Smoke detectors are more common and they detect fires through one or more combinations of detectors: ionization, photoelectric, and sometimes heat. Smoke detectors that have an ionization chamber pick up smoke particles that change electron charges inside the chamber to trigger the alarm.

Varieties that use photoelectric sensors on the other hand use light. It utilises a unit of LEDs and photocell receptors, and detects the presence of smoke when its particles block the light passing between the LED bulbs and receptors. When the smoke scatters the light and not enough of it falls on the receptor, the device’s alarm is triggered.

These detectors are best found in rooms, kitchens, and other susceptible places where fire may occur. In addition to smoke detectors, various other failsafe mechanisms are built in place by reputable contractors. These mechanisms include circuit breakers for power, and other preventive measures.

The BuildQ Group uses approved and best industry-standard fire wall materials to keep joint homes safe, being able to retain fires for up to 2 hours. A combination of fire blanket, fire rated seals, Gyprock , and earthwool on top of the roof ridge materials are used to keep fires at bay in an event of fire.

Keeping you safe from possible intruders

More importantly, homes provide safety against intruders. Many basic features in homes such as locks and alarms are essential to keep out ill-intentioned persons. Houses with advanced security measures can ward off intrusions even before they reach the door, or provide helpful information to authorities when they get caught.

BuildQ offers security solutions through simple techniques that can create a more secure outcome. When they install telephone wires or data cables, they also connect it to security displays, and connect it to the base system. This helps homeowners to connect modern security systems to their telephone or NBN network, and connect their mobile devices as well.

In the event that someone dares to break in or intrude their space, a flash or a ringing alarm informs the occupants of the security breach.

Perhaps one of the most important safety features of a home is of course the door lock. The main door or gate is usually the most-secured entry to a house, and many inventions have been developed to ensure that intruders cannot gain easy access through it.

Most houses retain the lock-and-key combination, with many today utilising improved systems such as deadbolts, combination cylinder types, lockable thumbturns, and others with specialised keys. However, these are mechanical and in one way or another can be picked or “jimmied,” or can easily result in the owner getting locked inside by accident.

Secure keyless entry features are a recent and amazing innovation that puts away the lock pick-prone mechanism of traditional locks. Most keyless entry installations or “smart” locks use either a passcode or biometric (fingerprint) input, making it virtually impregnable to unauthorised entry.

In the event that the owner or a family member is accidentally locked inside, various backup methods can be used to open the lock without compromising its physical structure. You don’t need to break the door down or jump through a window to get inside or go out.

Some types of keyless entry locks also contain a port for voice input, either allowing for communication with the homeowner or voice recognition as an extra “key” option for entry. Even more advanced models incorporate video for facial recognition and wireless internet connection for unlocking the door using a registered mobile phone for authorisation.

Even windows can be fitted with special types of locks, further securing them from being used as alternative entryways for invaders. In addition, quality window panes are now made of shatterproof glass to prevent shrapnel cuts from broken glass.

The 2020 pandemic from the novel coronavirus disease Covid-19 showed the world the importance of the home is during lockdowns or social distancing. No one would want their loved ones to catch the deadly disease, but at the same time, everyone would want to make the most out of their time at home.

When you feel secure in your home, you and your loved ones will surely feel more relaxed and can enjoy spending time together. Family time becomes essential bonding sessions between members as they can better enjoy movies, play indoor games, or even by simply dining together with peace of mind.

There’s nothing more important than knowing everyone in the house is safe against invasions of personal space, and health hazards such as viruses and weather-induced illnesses.

Reputable builders such as the BuildQ Group make sure that every homeowner is provided the safety they deserve as outlined above. BuildQ Group ensures that their customers are protected from health hazards and potential home invaders with a plethora of safety features both against internal and external elements.

What’s more, they also offer a 6-year structural warranty period, giving homeowners assurance and peace of mind for whatever compromises that may come up during the first few years of living in their properties. Each property they offer also include various premium inclusions on top of great home security features.

With a complete breakdown of plans, inspection procedures and certifications BuildQ Group guarantees 100% customer satisfaction for its customers, giving them not only a safe haven for them and their loved ones but also peace of mind and overall, an incredibly safe investment in the form of their dream home.

We Would Love to Hear From You. Please,